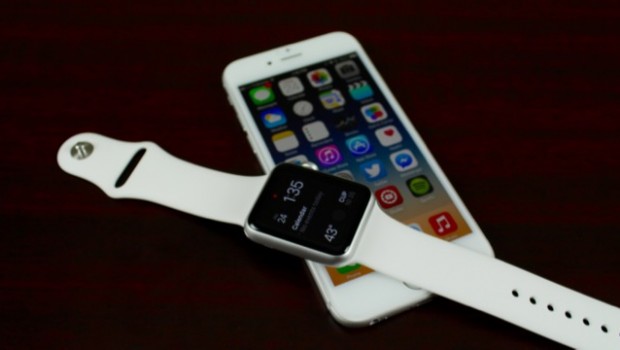 To no surprise, the Apple Watch comes in a minimalistic, all white box. It’s an oddly shaped, long box but still beautifully designed. The presentation once you open the box has a premium feel to it. First, you are greeted a very premium feeling long box containing the watch. Underneath that is some information guides and an extra watch band for those with smaller wrists. Finally, you have the magnetic charger and the wall adapter that is identical to those used for the iPhone.

Upon opening the box containing the apple watch, you will have to remove some protective plastic before use. Given the way everything was packaged, the unboxing satisfaction was not a disappointment.

The rest of the body is covered in a silver aluminum casing. The right of the watch contains one side button and a digital crown, which will serve as the primary controller of your Apple Watch instead of your finger, which is also an option if you choose to do so. The left of the watch is home to a speaker and microphone and the bottom of the watch ill house your heart rate monitor and is also where the magnetic charger goes. Since the charger is magnetic, it’s pretty straightforward, just let the magnets do the work, and your device will begin to charge. You will also notice a LED light on the front of the watch indicating that your device is now charging. As far as battery life goes, Apple claims that the watch can last up to 18 hours. Somehow, I don’t but leave that but I’ll save my judgments for the full review. The Apple Watch is also water resistant, but you won’t see me dunking this guy in any water anytime soon.

The Apple Watch is pretty easy to get on, just like most watches, you line up the fastener with the appropriate size hole, and then feed the rest of the strap through the slip in order to conceal the unused portion. The watch is noticeably lighter and a bit smaller than the Moto 360, which takes on the more rounded approach. I will compare the two devices in the future in much more detail but as comfortability goes, I give the slight edge to the Apple Watch.

Upon powering the watch for the first time, you will have to go through the necessary setup process. Now Apple has already rolled out an update a few weeks ago that force fed you the corresponding Apple Watch App that can be used for all things related to the watch, including a simple pair mode. The setup process can take a few minutes, especially if you choose to install some apps that your phone and watch are already compatible with. For example, the Twitter app is fully functional out of the box, and you can view recent trends and your Twitter timeline. You will also have access to some third party apps right of the box, and I naturally expect more to come in the next few hours, days, and weeks.

Once the watch is setup, you will notice that Apple has usually included some built-in apps to get you started. In a typical smartwatch fashion, you will have access to your Messages, Phone Calls, E-Mails, Calendar, and whatever exercise you may or may not do with Workout and Activity tracking. You also have access to some other routine functions like your clock, maps, and weather.

Receiving and viewing these notifications are pretty straightforward. For example, when receiving a message, your wrist watch will vibrate, and all you need to do is raise your watch to your face as if you were checking the time, to see the message. Then, by swiping or using the digital crown, you scroll through the message and view your options. You can either dismiss the message or reply via voice, pre-written text responses or animated emoji.

An excellent software feature is the ability for the Apple Watch to distinguish a simple tap from a firm touch, also known as a “Force Touch”. A force touch can bring other menu options and features that may not be visible at the moment. This includes but is not limited to changing your Watch Face, composing a message, or making a phone call. You also have access to Siri, who can do just about all of these things mentioned earlier.

As it currently stands, I am not the biggest fan of the app launcher interface. I find myself pressing an app that I am not trying to open and when I use the crown, it just immediately zooms into the centered app. It’s going to take some getting used to.

Aside from the ability to use Apple Pay on your watch, the Apple Watch comes with some pretty standard smartwatch features that we have seen from previous smartwatches like the Moto 360 running Android Wear or the Pebble Smartwatch. I will say that I am a fan of the UI, and that could be because it’s something different but right now I tend to favor the apple watch esthetics over the previously mentioned smartwatches.

The apple Watch app for the iPhone will be your home to all the settings for your watch and looks almost identical to the settings app for your iPhone. You can change your App Layout, toggle airplane mode, do not disturb, and other various settings.

These are in no way my final thoughts on the Apple Watch as I have only spent a couple of hours with the device, but my initial impressions are positive. I am a fan of the UI and the way the notifications are received and the interaction with these notifications.

The problem is, my phone is rarely in my pocket. I spend 8+ hours a day sitting at my desk with my phone right on top of it. Checking notifications is rather simple. At home, my phone also rarely sees my pocket. The problem with smartwatches to me is that there isn’t much that they can do that my phone can’t. Sure, sometimes, the convenience of not having to reach for you phone for information is cool but its not necessary. It’s certainly not $400, $600, and $17,000 required, which is what a few different models of the Apple Watch retail for.

I am not saying not to buy this, and I certainly haven’t spend much time with this watch yet but I am just worried that in time it will end up like the others, on my wrist, but sadly neglected.