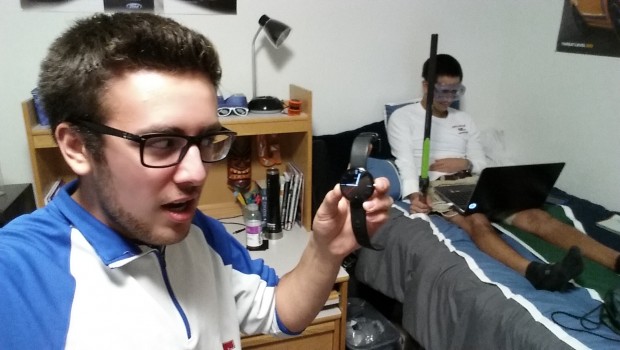 Hey guys!  I know Tim has been putting out a lot of info this past week on various tech items, but what would a week be without some tech news!

As you can see in the featured image I got the Moto 360 this past weekend!  And all I can say is its such a beautiful piece of hardware…and so far the battery life hasn’t been too bad.  Also, as you can tell, I had a little fun with my roommate making that photo…

Anyways, on to the news!

– To start off I just want to talk a little about the Moto 360…of course!  iFixit did a teardown of the device and found that Motorola “lied” about the size of the battery inside the watch.  They found a 300mAh battery inside instead of the 320mAh battery advertised.  Shortly after iFixit posted this, Motorola responded but saying that the “typical battery capacity” for the watch is 320mAh while the “minimum” is 300mAh.  All disputes aside, I have only had the device for a couple of days, but the battery life has been fine for me so far!

– I, as you might have noticed, am not much of an Apple fan, but I feel obligated to talk about their new devices.  I have got to say, Apple has definitely stepped it up this time around with the iPhone 6 and 6 Plus.  For some quick specs, the 6 has a 4.7″ Retina HD display while the 6 Plus has a 5.5″ Retina HD display, both use the A8 chip with 64-bit architecture, both have a new 8MP iSight camera, and both have a fingerprint scanner.  Hit up Tim’s video to learn more!

– Netflix announced this past week that their iconic Post-Play feature will finally be making its way to Google Chromecast.  This means that when you are watching Netflix over your Chromecast it will now automatically play the next episode when one ends.  So now its even easier for you to waste your time watching a whole season in one day

– Google updated the Hangouts app to version 2.3 this past week bringing with it Google Voice Integration and free VoIP calls!  Hit up Tim’s video on this to learn more about this awesome new feature.  Also, download the update here!

– Sprint has revamped its ‘Sprint Prepaid’ branch this week to include some pretty nice offers.  This new hierarchy consists of three plans, each with unlimited talk and text as well as a certain amount of data.  For $35/month you will get 1GB of data, for $45/month you’ll get 3GB of data and for $55/month you’ll get 6GB data.  I don’t know about you, but I’d have to say these plans seem pretty good – if only the network was just as good…

– This is pretty interesting – Google bought a startup company, known as Lift Labs, this week that develops devices for Parkinson’s patients.  The main product made by this company thus far is a high-tech spoon that uses sensors and stabilizers to detect and compensate for tremors.  The real question here is why – why did Google buy this company?  I think its all part of their elaborate scheme to take over the world…

– Google bought yet another startup this week – this one called Polar – which will be joining the Google Plus team.  Polar is a company that essentially gives you the tools to create an online poll and publish it.  This buy-out seems a little more realistic than the last, but I still wonder why Google needs this company

– Since we are talking about companies buying companies, Microsoft officially bought out Mojang, the makers of the popular game Minecraft, for a solid $2.5 billion dollars.  Again I question why a company like Microsoft would buy a company like Mojang, but then I realized Microsoft is just like me – greedy.  Unfortunately for the players of Minecraft, this buy-out most likely means that Microsoft will start charging either more for the game or will charge for in-game items

– Google finally announced its first Android One smartphone this week!  Google worked with Indian manufacturer Micromax to release a smartphone for just $106.  This device will have a 4.5″ 480 x 854 resolution display, 4GB of internal storage, 1GB RAM, a quad core 1.3GHz MediaTek processor, Android 4.4.4 and a 1,700mAh battery.  I’d have to say these specs, besides the screen resolution, definitely don’t seem too bad for the price point

– The new Moto X and Moto Hint earbuds will go up for preorder this Tuesday, 9/16.  Only the AT&T Moto X and the Moto X – Pure Edition will be available though, but if you have been waiting to get your hands on one now is your chance!  The Moto Hint – a sort of discrete bluetooth headset, will also be available.  Follow this link to preorder!  Also hit up Tim’s video he did on the Moto X to learn more about the device itself

– For anyone with a .edu email address – you can get a $50 saving off the asking price of the new Moto X 2014 edition sans contract.  This makes the final price to be 450 bucks, which is definitely a good price for a brand new phone.  Only one catch – only AT&T is offering the new Moto X right now.  But if you’re interested hit up Motorola to sign up for this offer!

– Google Glass was updated this week to version XE21.0!  It brings with it Waze information for naviagtion as well as the ability to update flight and sports scores much faster.  Head on over to Google to check out the update!

– Sprint updated its flagship Galaxy Note 3 to Android 4.4.4 KitKat this past week!  This update includes new features such as HD Voice Icon support, Knox 2.0 and Kids Mode.  Head on over to Samsung’s website to find out more!

– Sony rolled out Android 4.4.4 KitKat to the Zperia Z, ZL, ZR and Tablet Z devices this past week.  This update brings with it the performance and UI improvements from KitKat as well as a revamp of Sony’s entire native app portfolio.  Head on over to Sony’s website to find out more!

– The Verizon LG G2 got an update this week to firmware version VS98025B.  This update brings a lot of little things with it, but the main feature is that Verizon’s VoLTE is now supported on this device!  Check out DroidLife to learn more!

One Response to A Week in Tech – Episode 7