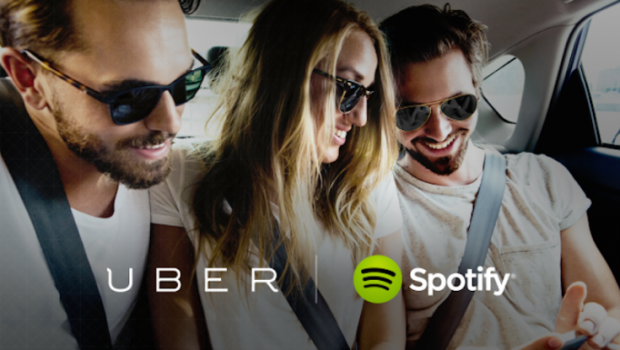 – The once extremely hyped gadget that I waited to get my hands on for like two years is now starting to fall apart – at least that’s what it seems.  Yes folks, Google Glass is starting to go down hill as the release of the consumer edition is still nowhere in sight and might not be released till 2015 at this point.  In addition, Google Glass, once priced at $1,500, is currently selling for half that price on eBay.  Unfortunately, some key personnel and app developers have actually left the project as well.  Hopefully Google Glass does come out next year and doesn’t just slowly die out.

– This past week brought some rumors to an end as a new partnership between Spotify and Uber has been confirmed.  A pretty genius idea that allows you to pick the playlist for your Uber ride through Spotify – hence, Spotify Your Uber.  Of course there are some catches to this as you will need to be a Spotify premium member and it will only be available via “music-enables Uber drivers”.  This service will start on November 21st and will only be available in ten cities to start – hopefully I will be able to try this out as it sounds pretty cool!

– Some pretty unfortunate news for those on Verizon that don’t like to have the same phone for two whole years.  Verizon just recently announced that they are changing their ETF (Early Termination Fee) Policy making is so that they don’t start reducing the $350 cost of the ETF until 8 months into your contract.  Once you hit 8 months, a $10 reduction will occur each month between the 8th and the 18th month, then a $20 reduction each month between the 19th and 23rd month and finally a $60 reduction on the final month.  Head on over to Verizon to learn more!

– A very interesting device was posted on the Google Play Store this past week dubbed the Project Tango Tablet.  I didn’t know about Google’s Project Tango until now, but it is apparently a project with the goal of giving devices a human-scale understanding of space and motion through the use of customized hardware and software to track full 3D motion and geometry of the environment.  This tablet just released will include this interesting new technology by Google.  The Project Tango Tablet will cost you a hefty $1,024, but for good reason as not only does it come with this new technology, but it comes with some amazing specs to support this tech.  It will come with a 7″ 1920 x 1200 HD IPS display, dual stereo speakers, 128GB internal storage, 4GB RAM, KitKat 4.4.2, a 4MP 3um RBG-IR pixel sensor on the back and an NVIDIA Tegra K1 processor.

– If you didn’t see Tim’s video this past week, Google released their first standalone Messenger App onto the Play Store!  I instantly downloaded it and have been using it since as it is a pretty nice SMS app and looks gorgeous – only wish it would have a pop-up notification for text messages as an option.  Hit up Tim’s video to learn more and get the download link!

– In addition to Google’s Messenger App, this week also brought an update to yet another Google App – Google Keep.  This update brought with it the Material Design UI – which looks wonderful – a new search function, and a new pop-up notification at the bottom of the app.  Hit up the source to learn more and to get a download link!

– Samsung recently had their developers conference and with it came some announcements such as a new health platform and SDK as well as a new SDK for SmartThings – a company they recently acquired – but one of the more interesting things they announced is something called Flow.  People are apparently comparing this to Apple’s Continuity feature, but basically what it does is allow for better communication between all of your Samsung devices.  One thing I like about Apple is their connective-ness over their devices and I can’t wait to see other companies start to do this.

– It appears yet another update will soon be coming to the Android Wear platform.  This update will supposedly bring a lot of new changes like the ability to take native screenshots and a function to “forget wearable device” making it easier to pretty much un-pair your Android Wear smartwatch from your smartphone.  In addition, this update will bring some new features such as battery tracking stats and an easier way to change the brightness.

– Snapchat is a wonderful app for a lot of people, but unfortunately some have to take advantage of it and thus they have had a lot of security breaches.  Part of this is due to the fact that there are so many third-party Snapchat apps that people are using – making it easier for hackers to get to your personal pictures.  Snapchat is trying to reduce security risks by threatening to lock accounts if you do not stop using third-party apps.  This is very interesting as they are obviously trying to reduce data leaking, but at the same time they will get more money from more people using their app that might not want to.

– The LG G3 was, at the time of its release, the first Quad-HD device that customers in the US could get their hands.  At the time of release, LG had indicated there would be several color options available and now they have just announced that Best Buy will be selling it in metallic Blue Steel for $99!  Hit up the source for more information!

– Kingston just recently announced some really awesome new SD cards to their line of memory cards.  This SD cards include a 256 GB Class 10 SDHC/SDXC memory card for cameras and a high performance 128 GB MicroSD card for other mobile devices.  I don’t know when these will be out or for how much, but hit up the source to learn about them!

– The Android Wear App was updated this past week to version 1.0.4.  Unless you are on Android Lollipop, the app will still have the same black theme.  The options have been rearranged a little and the settings are a little different, but not much has changed about it.  Still – as least Google is supporting their Android Wear platform!  Hit up AndroidPolice to learn more and to get the apk.

– This past week AT&T pushed out an update to their Samsung Galaxy s4 bringing it to Android KitKat 4.4.4.  This is a rather minor update with the only big changes being the addition of KNOX 2.0 and a few AT&T bloatware apps.  Hit up AT&T to learn more!

– This past week AT&T also pushed out an update to their LG G3.  While this is not Android Lollipop, any update is better than none.  This update brought with it some stability improvements as well as Google security patches.  Hit up AT&T to learn more!