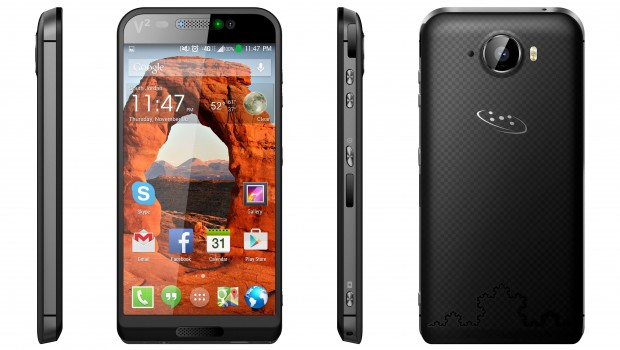 Today, Saygus has announced that the Saygus V2 or V-Squared will be available for an introductory price of $549. After the extended pre-order deadline of Monday, February 2nd, the V-Squared will go back to it’s original retail price of $599. Upon pre-ordering the phone, customers will also receive an additional battery and a customized, replaceable screen protector.

For those who are unfamiliar with the Saygus V2, it is probably the most feature rich smartphone on the market. Below are a few of the eye-popping specifications:

Now this device certainly has some gaudy specifications, and hopefully it lives up to the hype. We can’t wait to get our hands on one and test it out for ourselves. If you want to know more about the device, check out Tim’s video below on the Saygus V2 from CES 2015. Also, check out the full press release below.

SALT LAKE CITY—Jan. 29, 2015— Saygus, the progressive American smartphone manufacturer, today announced that the Saygus V2 (pronounced V-Squared) will be available at a limited introductory price of US $549 for a $50 savings off the standard pricing of US $599. Saygus has extended the pre-order registration deadline to noon MST on Monday, Feb. 2. Pre-orders at saygus.com will then officially commence at 11:59 p.m. MST Monday, Feb. 2.

“The V2 was created from the ground up to be one of the most feature-rich smartphones ever made,” said Chad Sayers, Founder of Saygus. “We are pleased to offer the introductory price of $549 for a limited time to those who have pre-registered.”

The Saygus V2 is housed in a hardened Kevlar protective edge with durable anodized brushed aluminum sides and is less than 10mm thick. With access to CDMA and GSM wireless technologies, the V2 is a world phone designed to be used around the globe. The V2 has a 5-inch edge-to-edge borderless screen offering a resolution of 1080 x 1920 (FHD). It comes with an industry first optical image stabilization (OIS) in both the rear (21MP) and front (13MP) cameras, waterproofed IPX7 “swimmable” capability, sunlight viewable screen, 3100 mAh battery with 50% battery savings chip boosting the battery to approx. 4600 mAh, and a compact, side-facing fingerprint scanner for personal security.