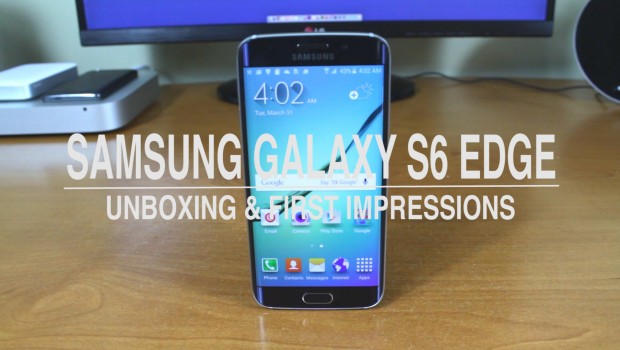 Samsung will officially be releasing its 2015 flagships: the Samsung Galaxy S6 and S6 Edge. If you have not checked out Tim’s unboxing of the Galaxy S6, you should check that video out right here ASAP! Thanks to T-Mobile and their need for breaking the rules, you can pick up an S6 or S6 Edge right now!

Above is my unboxing and first impressions of the Galaxy S6 Edge. For those who can’t watch the video right now, I will leave you with my initial impressions via text. As some of you may know, I am not the biggest fan of Samsung mobile devices. I love their televisions (I happen to own a Samsung refrigerator) but the reason for my particular disdain for Samsung Mobile is due to TouchWiz. TouchWiz has ruined Samsung for me. The software looks childish and can make a device lag for days. Couple that with mediocre looking hardware, and you have a recipe for a disaster (yet people still buy them).

When the S6 & S6 edge were announced, I could not help but notice the fresh, new design and the attempt at innovation within the S6 edge. I appreciate what Samsung was TRYING to do with the Note Edge but it was not quite there, and the device was embarrassingly expensive. Although, the S6 and S6 Edge are also pricey; the design was beautiful and eye popping. It screamed “I must have that.” There was only one problem; it still runs off of TouchWiz. Well, Samsung understood that not everyone likes TouchWiz, and they decided to debloat their phones. Gone are the days of a ton of unnecessary apps that nobody uses (there are still a few but its better than a bunch).

Upon the first bootup of the device, I noticed how great the S6 Edge feels in the hand. It was a little sharp around the edges, but that feeling dissipates quickly. I am still a little uneasy about a phone made entirely of glass and metal, but it feels super premium and it seems to be pretty scratch resistant (just don’t drop it). Then, we come to the elephant in the room, the dual-sided curved display. It’s not gimmicky like the Note edge, it feels like the phone should be like this. Text and menus wrap around the phone, making it feel like the text comes from the back of the phone. It’s pretty hard to explain so you will just have to watch the video above and stay tuned for my full review on the Samsung Galaxy S6 Edge.