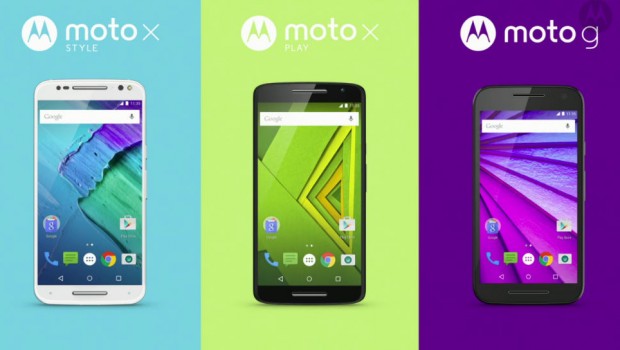 Hey guys!  Already back again with another article – and this time we are going to talk about all the new gadgets Motorola announced this morning at their press conference.  They revealed two brand new models of the Moto X – the Style and the Play.  Additionally, they announced an updated version to the Moto G – lets get to the specs!

– 21MP rear-facing and 5MP front-facing camera – both with flash

The Moto X Style is definitely an upgraded version of the Moto X 2014 and will even come in a “Pure Edition” in the US.  This edition will give you a fully unlocked model that can be used on AT&T, Sprint, Verizon or T-Mobile and it will come with a nearly pure Android experience/UI.  It will be avaliable through Best, Buy, Amazon, and Motorola’s website starting in September and will start at $399.

I am a little confused as one website is saying this device is available worldwide while another is saying it isn’t coming to the US – I’m gonna say it probably won’t be available in the US.  Besides that, this device seems almost better than the Moto X Style with its bigger battery and an almost better processor.  This device will go on sale in August and appears to be priced in the $300-$400 range.

The Moto G 2015, while an upgrade over the Moto G 2014, is definitely a less powerful device that the Moto X Style or the Play.  This device is on sale right now, I believe worldwide, and will start at $179 for the 1GB RAM/8GB ROM model and $219 for the 2GB RAM/16GB ROM.  Start customizing it here right now!