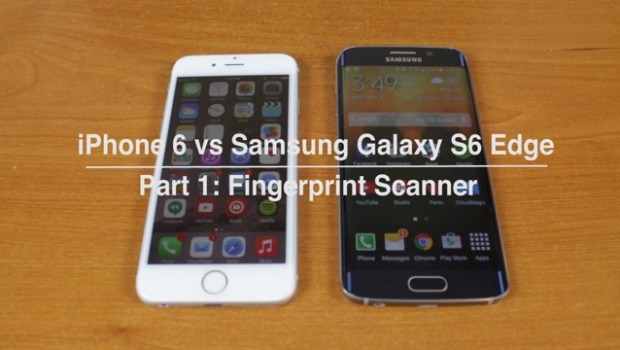 It’s no secret that this year’s hardware for the Samsung Galaxy S6 significantly resembles the iPhone 6 & 6 Plus. Samsung, who spent lots of money on negative commercials against Apple’s lack of creativity, has turned the page from last year’s “cheap-ish” Galaxy S5 and went with a more premium style and design.

The setup for each fingerprint scanner is rather tedious but important. In order to get an accurate reading, each phone’s scanner needs to get every inch of your fingerprint. Both devices also have you adjust your grip mid-setup. This process is important because not everyone holds their phone the same way every single time. Although the error margin is difficult to achieve, it’s not impossible. Each phone’s scanner won’t accurately read your fingerprint every time, but this problem is far from common.

In the video above, you can see that I used each fingerprint sensor at the same time (to the best of my ability), and each result was different. To the naked eye, it seems that both devices were even with each phone besting each other every once in awhile. When I slowed down the video, the S6 Edge seemed significantly slower at times than the iPhone 6. Again, this only appeared that way when the video was slowed down but during the live text, both phones appeared to be equal.

So what does this mean? It means that an Android OEM has FINALLY figured out a way to compete with Apple’s fingerprint scanning abilities. Considering that Apple purchased the company that makes their scanner and forbidding anyone else to use their secret feature, Samsung had to think outside the box on how to make theirs better. Thankfully, you no longer have to swipe down on the home button in order to unlock your phone, which was a disaster. Kudos to you Samsung, kudos.