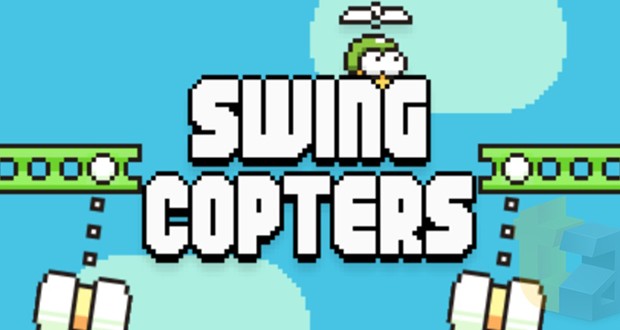 Following this month’s release of Flappy Birds Family, a multiplayer version of the original Flappy Bird that was only released for the Amazon Fire TV, Dong Nguyen, the guy behind DotGears Studios, launched a new game this week.  Swing Copters!  This game follows the same aesthetics and scoring system as Dong Nguyen’s first game, but this time it is a vertical scroller instead of a horizontal one.

Swing Copters is free to download (links below!) with Nguyen’s standard advertising model – the very same banner ad implementation that was earning him upwards of $50,000 a day back in February.  Apparently there is a 99 cent version for those interested in getting rid of the ads, but I don’t see that on the Google Play Store yet.

I have to warn you though, this game is 100 times harder than Flappy Bird.  Like I don’t even want to tell you my highscore it’s so bad.  Which makes me wonder… how long will this game last?  Are people going to get addicted to it despite its difficultly?  And will Nguyen take it down like his last game?

Let me know what you think of the game in the comment section below!