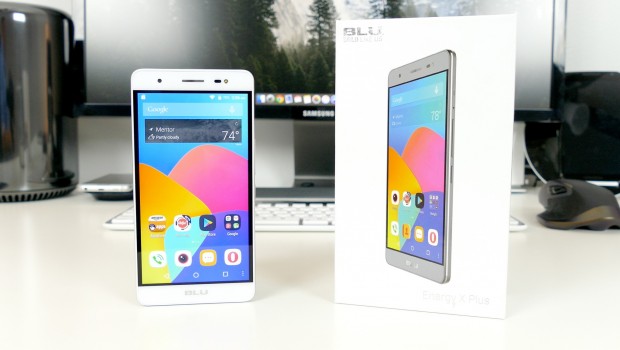 Near stock Android and a 4,000mAh battery. These are your main reasons to buy the BLU Energy X Plus. That and the fact that it’s only going to run you about $139 off contract. That price range is to be expected when it comes to budget phone champions BLU.

The Energy X Plus lives up to its big name in both size and battery life. The 5.5” HD IPS display is good and better than some of the other BLU phones that I have reviewed but still only 1280 x 720 resolution. This phone is also working with a 1.3GHz Quad Core processor and 1GB of RAM.

As per usual with BLU phones, you are only given 8GB of internal storage but fear not, as the memory can be expanded up to 64GB via a micro-sd card.

At first glance, I thought this phone had some metal or aluminium in the body but after looking much closer at the design, the Energy X Plus is beautifully designed with some higher quality plastic. The phone comes in a few different colors, matching the color scheme of the iPhone 6 Plus with Silver, Gold, and darker space-grey like option.

The right side will house your volume up & down buttons as well as your power button, and there are a few different card slots present for multiple sim cards and a micro-sd card.

As far as cameras go, you will find an 8MP camera on the back and a 5MP camera on the front. They are both decent but if you strictly rely on your phone to take high-quality pictures, this will not be the camera for you.

Unlike most BLU phones, the Energy X Plus has a non-removable back, which is not that big of a deal because the main selling point for this device is its enormous 4000mAh battery. There is not much to say or bore you with about the battery except for that it’s non-removable and that it can last you a long time. If you are a light user you can definitely go a couple of days without a charge and if you are a very heavy user, this phone should still last you a full day and then overnight of standby before even having to plug this baby in.

On the software side of things, you will be pleasantly surprised to find a near stock Android experience. BLU has various skins for different phones, which always puzzles me, but in this case, they DID lightly skin the phone but for the most part, it’s stock lollipop. If the no app drawer thing is a deal breaker, fear not and just download a custom launcher. Throw on the Google Now Launcher and you have a kind of, maybe, sorta Nexus like experience on the cheap.

If you want to spice up your phone a bit, BLU does have a few themes and effects to offer but the options are limited and not that great.

The Energy X Plus is available right now on Amazon for only $139 which is a heck of a deal and worth checking out.