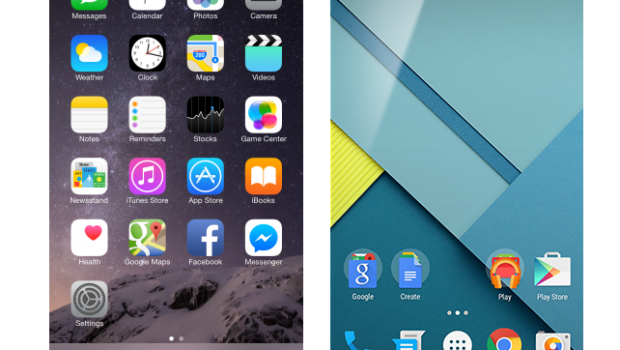 Every year, people can’t wait to see what Apple and Google will release as their flagship devices. This year we saw two new iPhones for the first time, the iPhone 6 and the iPhone 6 Plus. Google, with their Nexus line, released the Nexus 6 and the Nexus 9 Tablet.

With the new hardware, comes new software. This year we saw Android’s 5.0 Lollipop and the 8th version of Apple’s iOS, or iOS 8. After a few months with iOS 8 and very limited time with Lollipop, I wanted to bring to you my top 3 favorite “features” from each platform.

Anyone, who has had the opportunity to experience the newest version of Android, will surely enjoy the best feature (I know it’s not technically a feature) of Lollipop called Material Design. Material Design is a design language that is in different aspects of the OS, whether its transitions, animations or even certain lighting and shadows of each “card” design. The first thing, you will notice, is each apps unique color palette and this theme carries throughout the entire OS. 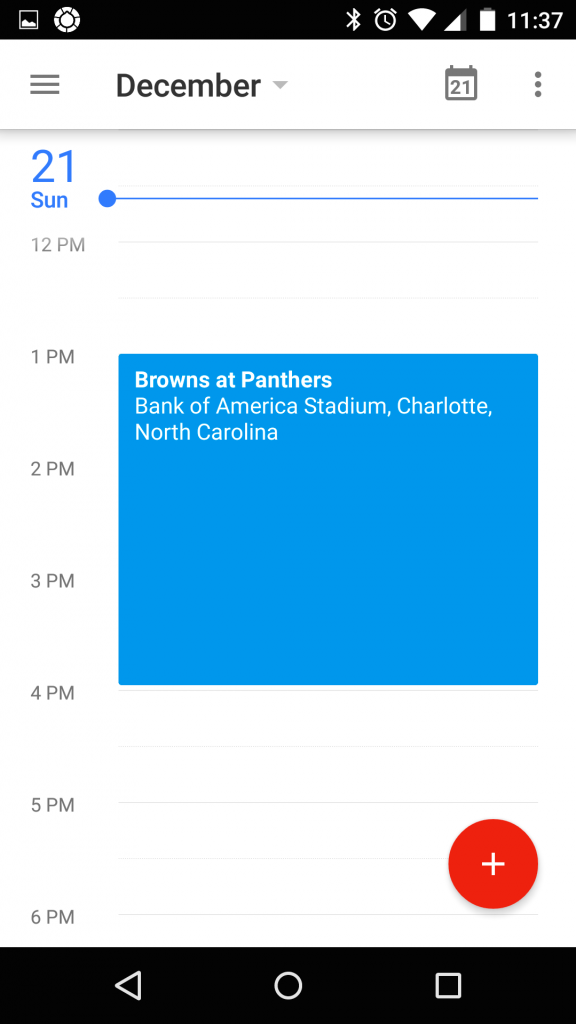 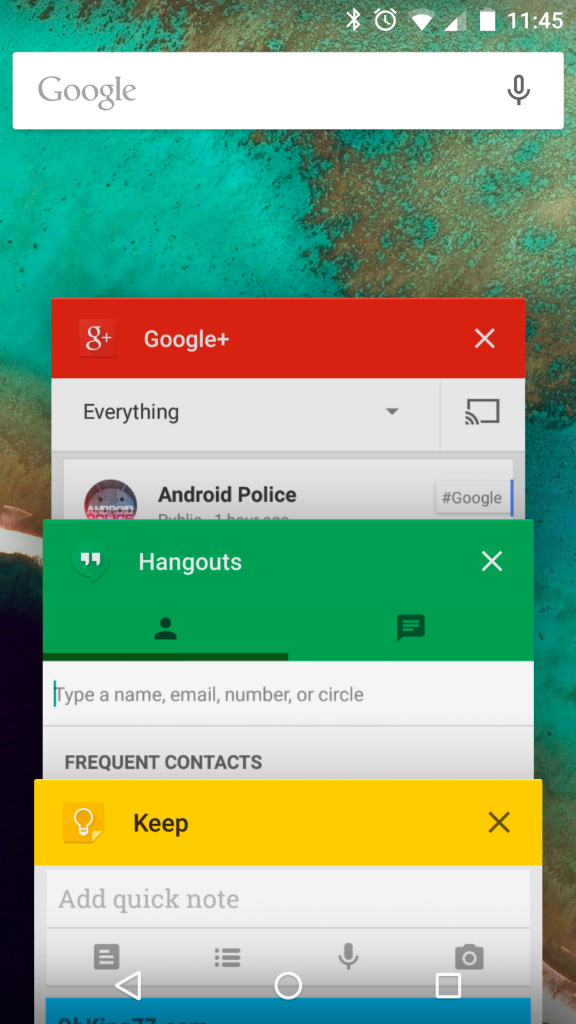 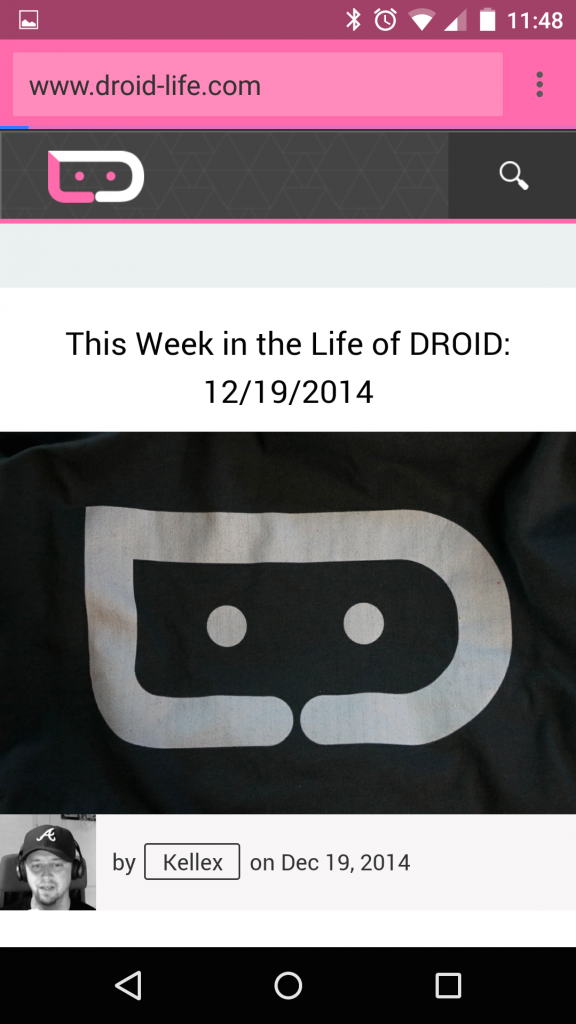 Also, there are animations for everything, and I mean EVERYTHING. From the hamburger menu icon transforming into an arrow to launching apps, Lollipop is jam-packed with animations that are very subtle and wonderful. You can see examples of this in the video below 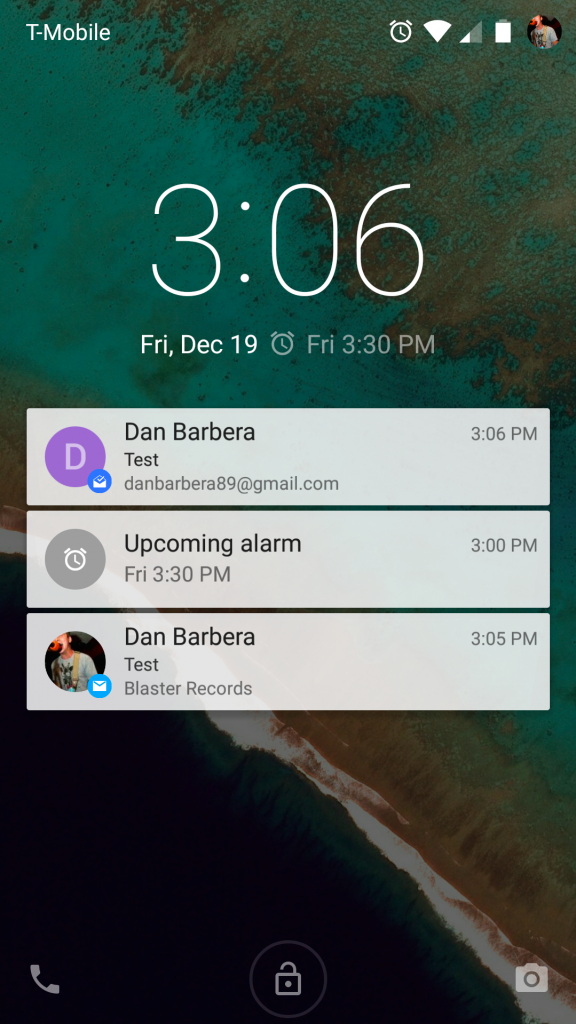 The notifications come the same “card style motif” and each app has unique interactive actions. A simple tap or two on the notification will launch the corresponding app while some notifications have more options with a swipe down. All notifications can be dismissed by swiping to the left or right. Google also added a clear all button in the bottom right which is extremely useful. You can also customize which applications show up on your lock screen and notification panel. 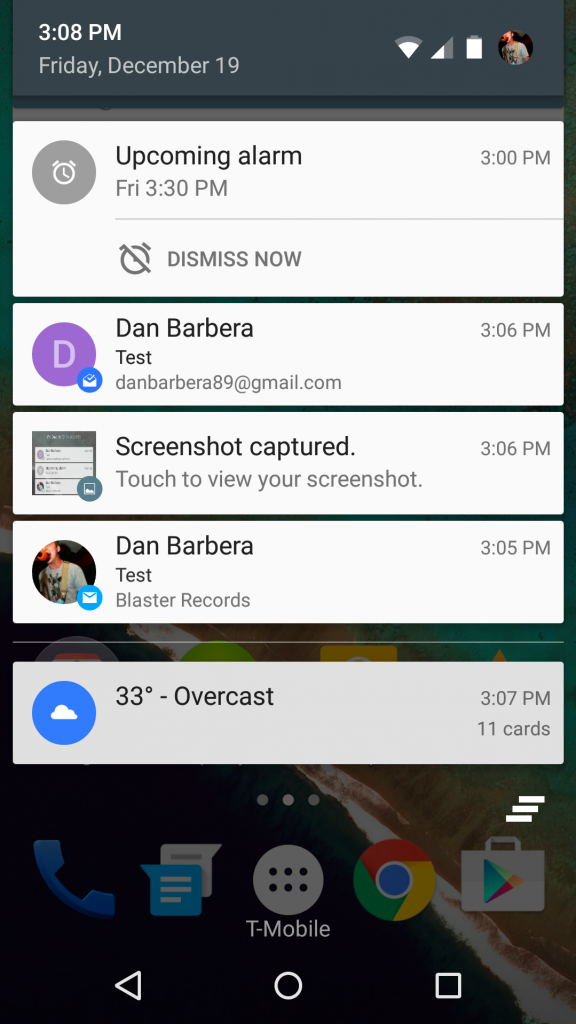 Unfortunately, in order to achieve this, it had to come at a price. That price was lock screen widgets. Personally, I never used lock screen widgets. If I did use them, it was the Dashclock widget, and that was to see what notifications were on my lock screen. Not all was lost though, as you can still swipe from the bottom right to launch into your camera, and the bottom left now gets you into your dialer.

This category is not particularly unique to Android, but I feel that it has more advantages than iOS. A two finger swipe down from the top will take you right to your quick toggles/settings and just that action alone, is far easier and more efficient than the swipe up that iOS requires. I usually have issues getting the swipe up in iOS to work all the time. 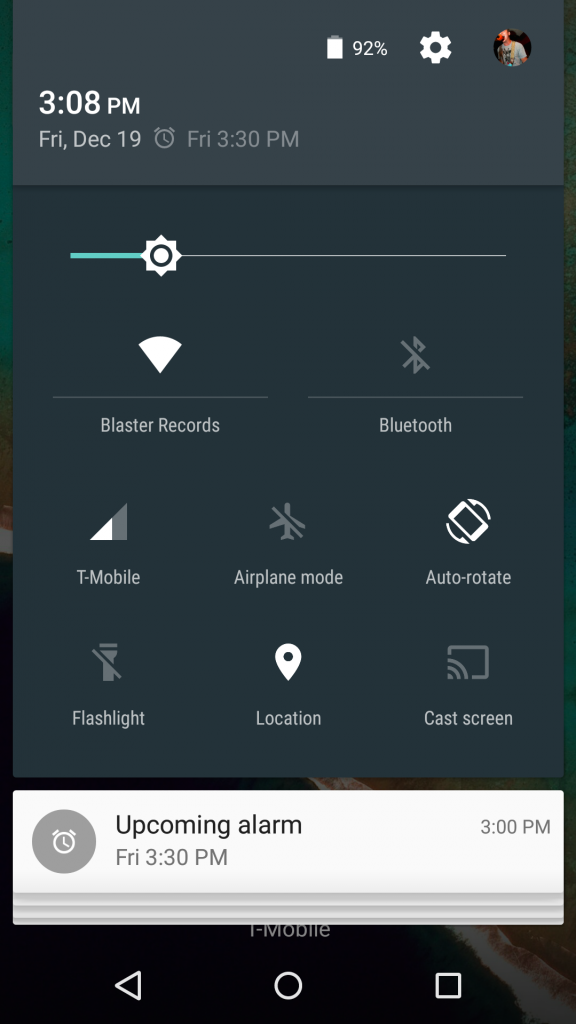 From this quick toggle panel, you have easy access to your battery info, profiles, your in-depth settings menu (which is something I wish iOS had in their quick settings panel), brightness toggle, Wi-Fi, Flashlight and portrait modes. You also have quick access to cast your screen via Chromecast or Nexus player. I used to root my Nexus 5 because stock Android lacked a few small but crucial features. Having a quick toggle to adjust your portrait mode or a flashlight seems like something that should be standard but it was not. Root was required to have this capability. The only thing, that’s missing for me, is the ability to have your battery percentage next to your icon in the upper right. When you pull the quick toggle down, you do see your percentage but I prefer it always to be in the right corner.

The multitasking function of Android Lollipop is also redesigned with a stacked card look which makes jumping from app to app a lot easier. A swipe to the left or right will close an application, or you can simply tap on the “X” in the top right corner of each app. You also can launch each application’s info page with a single long tap. Each application may have more than one window. For example, if one or more tabs are open in Google Chrome, you can use multitasking to switch from tab to tab (this also works with more than one settings tab too). The picture below illustrates this feature more clearly. 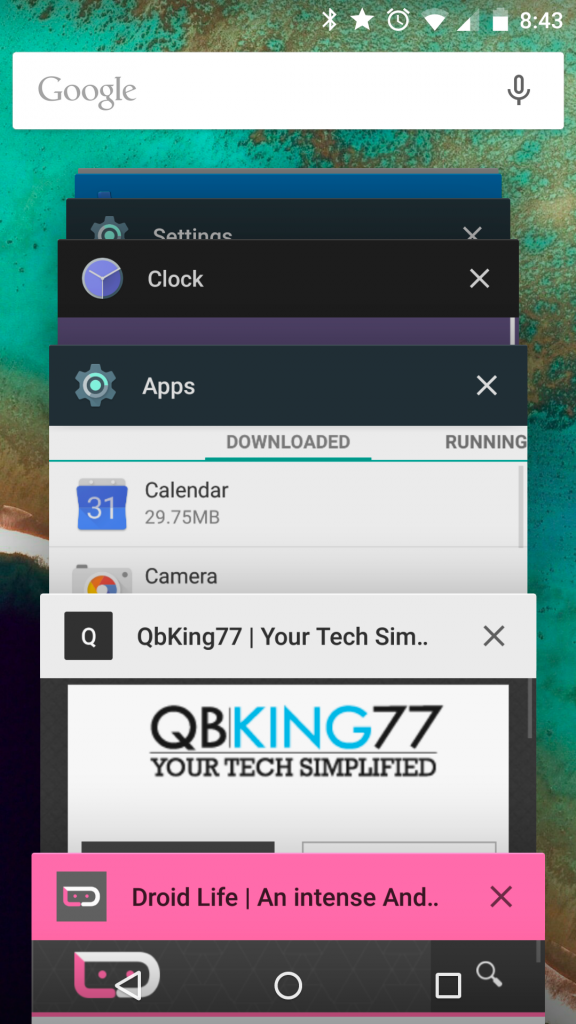 I am still learning new features about Lollipop each day but If I had to sum up my thoughts in one sentence, I would say its performance will eventually and hopefully catch up to its beauty.

Apple has always been behind the eight ball with a few features in their software but when they do get around to adding them, it’s tastefully done. This version of iOS is no different. Let’s check out my top 3 favorite features from iOS 8.

Apple has finally added the use of third party widgets, and although there are not many available at this time, developers are working hard to incorporate their widgets soon. You still can’t add widgets to your home screen, but you can access them from your Today/Notifications Panel with a simple swipe down from the top. 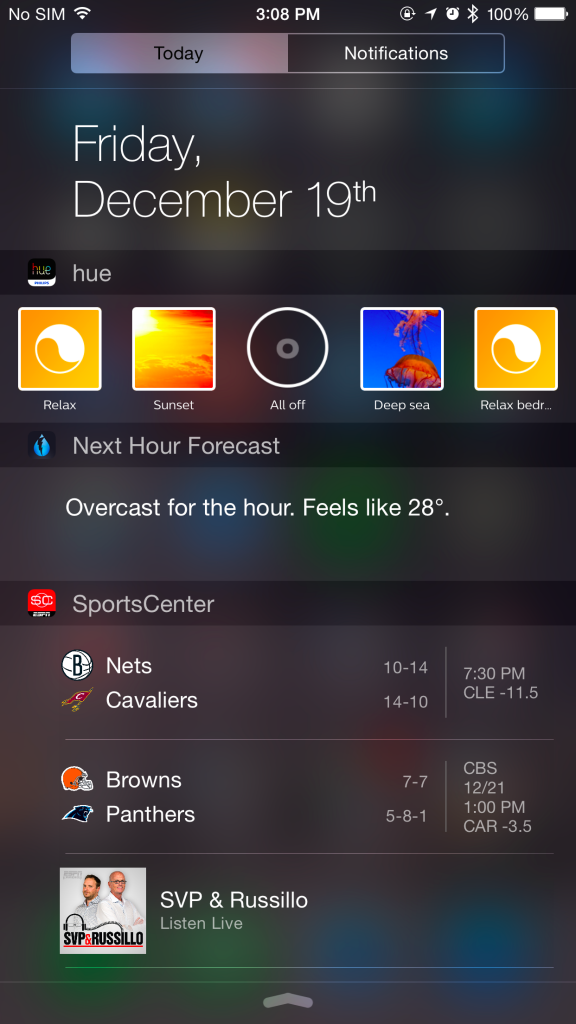 One of my favorite apps to include a widget so far is from Phillips Hue. For those who have Hue bulbs, the ability to quickly toggle on or off your favorite scenes is always a killer feature to have. ESPN has also including a ScoreCenter widget too. I find these two to be my most used widgets so far.

Notifications in iOS have also experienced a change, and it could be one of my favorite parts of iOS 8. Say your surfing the web when a text comes in that requires immediate attention. Instead of having to switch to your messenger, you can swipe down on the notification and access a quick reply toggle. This feature is no way revolutionary considering that third party messengers on Android have had this feature for years but for iOS, this is a big deal.

Swiping down on in-app notifications is not only specific to the messenger app but also with Calendar, Mail, and Facebook. 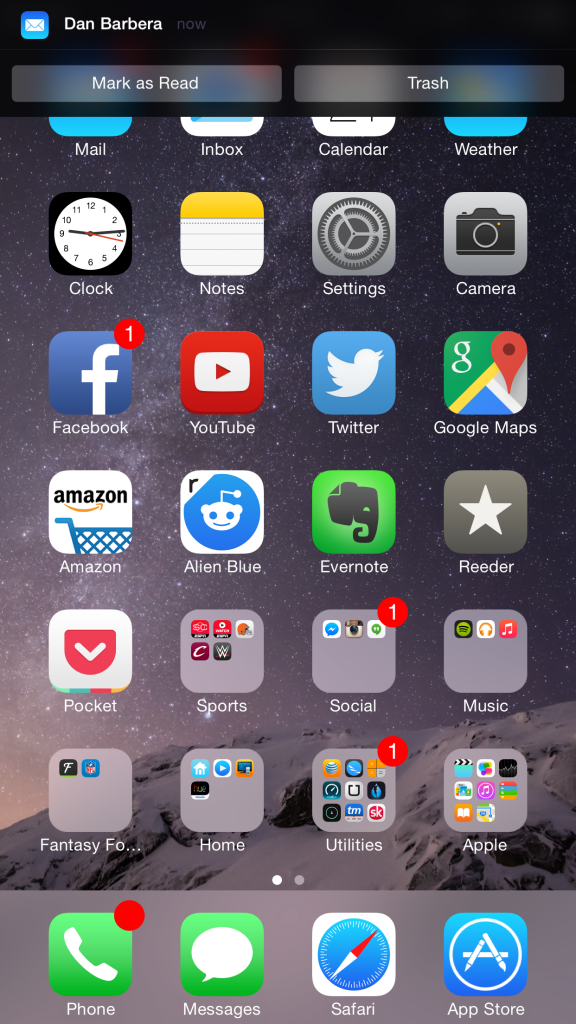 Handoff is by far the most interesting feature in the latest version of iOS. I can’t say that I have had to use it all that often, but when called upon, it is extremely useful.

Handoff allows you to begin a task or activity in the application on one device and then pick up where you left off on another. For example, if you are composing an email on your iPhone but you’re on your way to work, you can resume writing your email on your Mac or iPad once you have arrived at your office. An icon will show up in the bottom left corner and with one click of a button, the app will launch you to the exact spot you left off.

This feature also works with Safari, Messenger, and Apple’s “Office” trio of Pages, Numbers, and Keynote.

I wanted to focus more on the positives for each OS rather than the negatives. Believe me, there are negatives about both platforms. If you would like for me to touch on that in the future, please let me know!