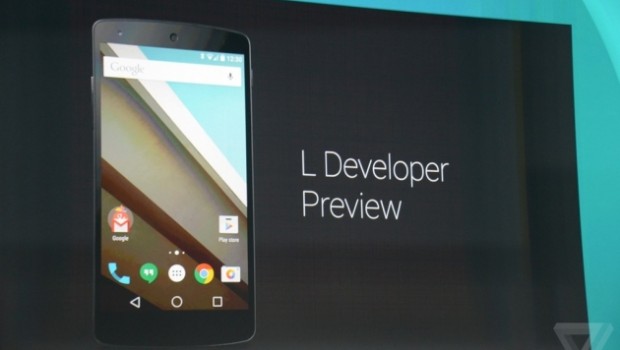 Here is a hands on and download of the Android L Developer preview for the Nexus 5 and Nexus 7. Please note that this is just a preview and not an official build. Only flash to test out the latest Android version.

It is speculated that this will be Android 5.0 and also be called “Lollipop”.

Here is a “lazy flash guide” from hello_foto on Reddit:

Step 1a (optional only do this if your bootloader is locked)

Step 2: grab those images from google

Step 3: if you are running windows extract the image files and start the flash-all.bat or manually flash away heres a guide on the instructions (look at method 2) XDA guide on flashing images

Step 1: Boot into bootloader, use volume buttons to select recovery and then hit the power button to boot into recovery

Step 2: In recovery there will be a small android hit power + up volume and a few choices shoudl pop up

Step 4: once the procedure is done reboot back into bootloader and reflash the images from step 3 in Lazy Guide

EDIT: THIS PROCEDURE WILL ERASE ALL YOUR DATA BACKUP IF YOU WANT TO SAVE PICTURES AND FILES

EDIT 2: If you want to go back to 4.4.4 or whatever other android version just repeat step 3 with the android version image you want, here is the link for the images Factory Images